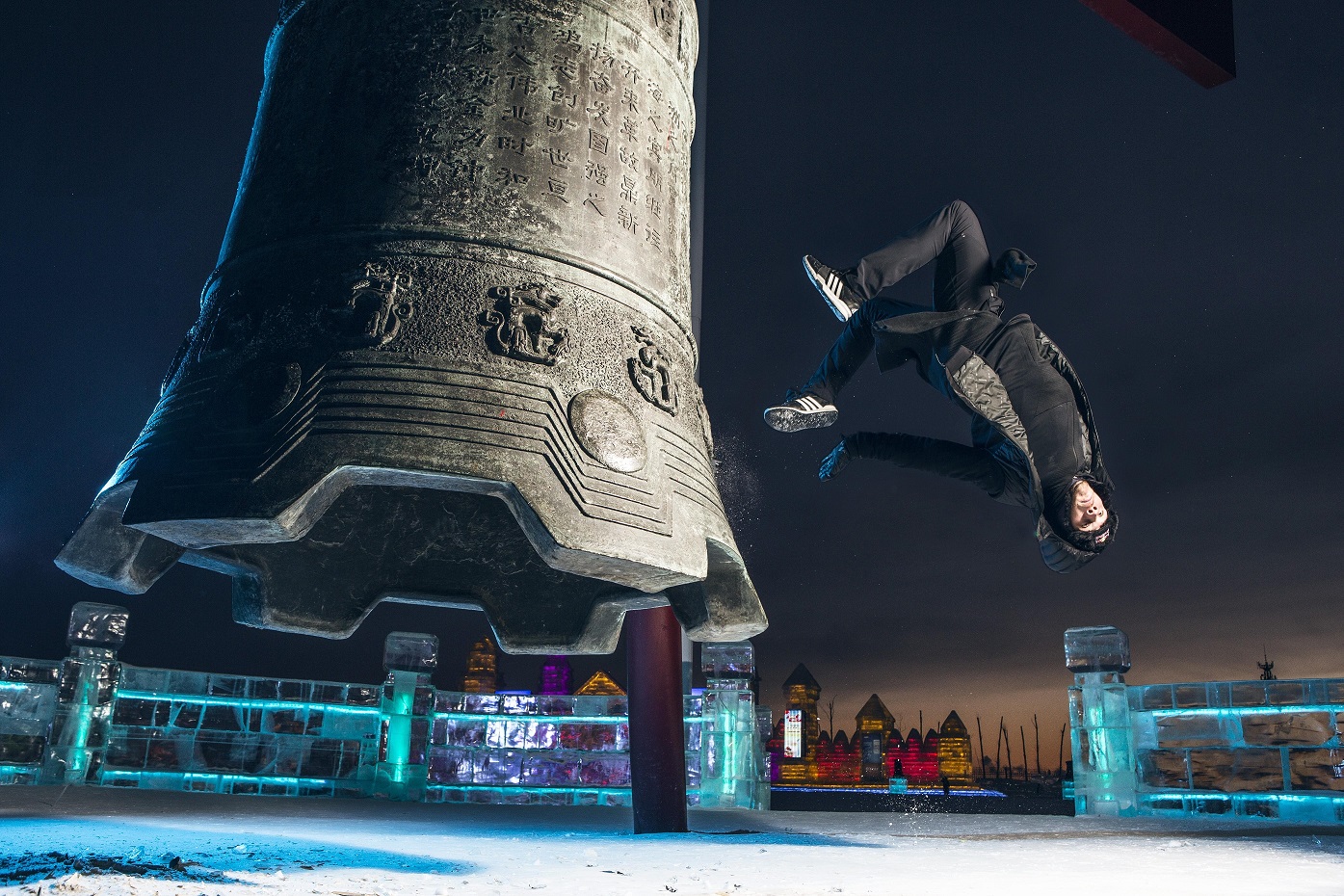 For the first time in its 33-year history, the world’s largest ice city was the playground for one of the planet’s leading freerunners. Jason Paul travelled to the North of China in January to reinterpret his sport in a completely new way. The 23-year-old German from Frankfurt brought fascinating images: freerunning on ice – Freezerunning!

Temperatures in the Chinese megacity of Harbin constantly fall below minus 25 degrees Celsius in wintertime. But despite letting the coldness paralyze the life in town, the capital of the Heilongjiang province celebrates the frost: Since 1985, Harbin has held the annual “International Ice & Snow Sculpture Festival”. Harbin’s fairytale ice world covers an area as big as 12 football fields. When temperatures fall below zero in the end of November, 10,000 workers and ice sculptors start to build gigantic towers, impressive palaces, huge bridges and high cathedrals made of ice blocks. They gather the ice bricks from the frozen Songhua river which separates the city in a southern and a northern half.

“I had seen fascinating images from Harbin on the Internet. What an epic playground for freerunners! I was overwhelmed when I entered the ice city for the first time after months of preparation,” Jason Paul described his arrival at Harbin.

The unfamiliarly icy terrain and the freezing cold brought several challenges for Jason Paul. Is it even possible to freerun on glassy ground at minus 30 degrees Celsius? Jason Paul’s answer was: “Yes – but in a different way than usual!” The extremely cold temperatures required an extensive warm-up. Every freerun on the icy structures demanded full concentration and absolute precision. Each move had to be perfect. The hard and slippery ice left no room for mistakes as Jason Paul couldn’t hold on to anything if a trick went wrong.

But being one of the best freerunners in the world, Jason Paul wanted more than just showing his most spectacular manoeuvres. “It was not my aim to just use the ice city as the backdrop for outstanding images. The idea was to take freerunning to the next level. I wanted to show tricks and choreographies that are only possible on ice.” After a first location check, specific training was necessary to achieve this goal. Jason Paul used special equipment such as shoe spikes during some of the runs and jumps. Other tricks, especially slides, only worked without wearing spikes. “The unique mix of the different elements and the ice has pushed me a lot. I managed to invent new moves that would not be possible anywhere else than in the ice city. I found a new facet of my sport at Harbin. My best combination was a flip onto a ledge, then a slide and a flip off the edge. Without wearing spikes, this was a true challenge!”, Jason Paul reported.

With the beginning of springtime in March, the ice buildings start to melt. Jason Paul is fascinated by the evanescence of the frozen metropolis. The freerunner is open to a return to Harbin: “They build a unique ice city here every year. For me as an athlete, this means a new and cool playground every winter. I would love to come back!” The clip “Jason Paul Freezerunning” reveals how Jason Paul got along with the cold temperatures and what oddities he experienced in China. It’s available onredbull.com/Jason Paul and YouTube from February 21, 2017.