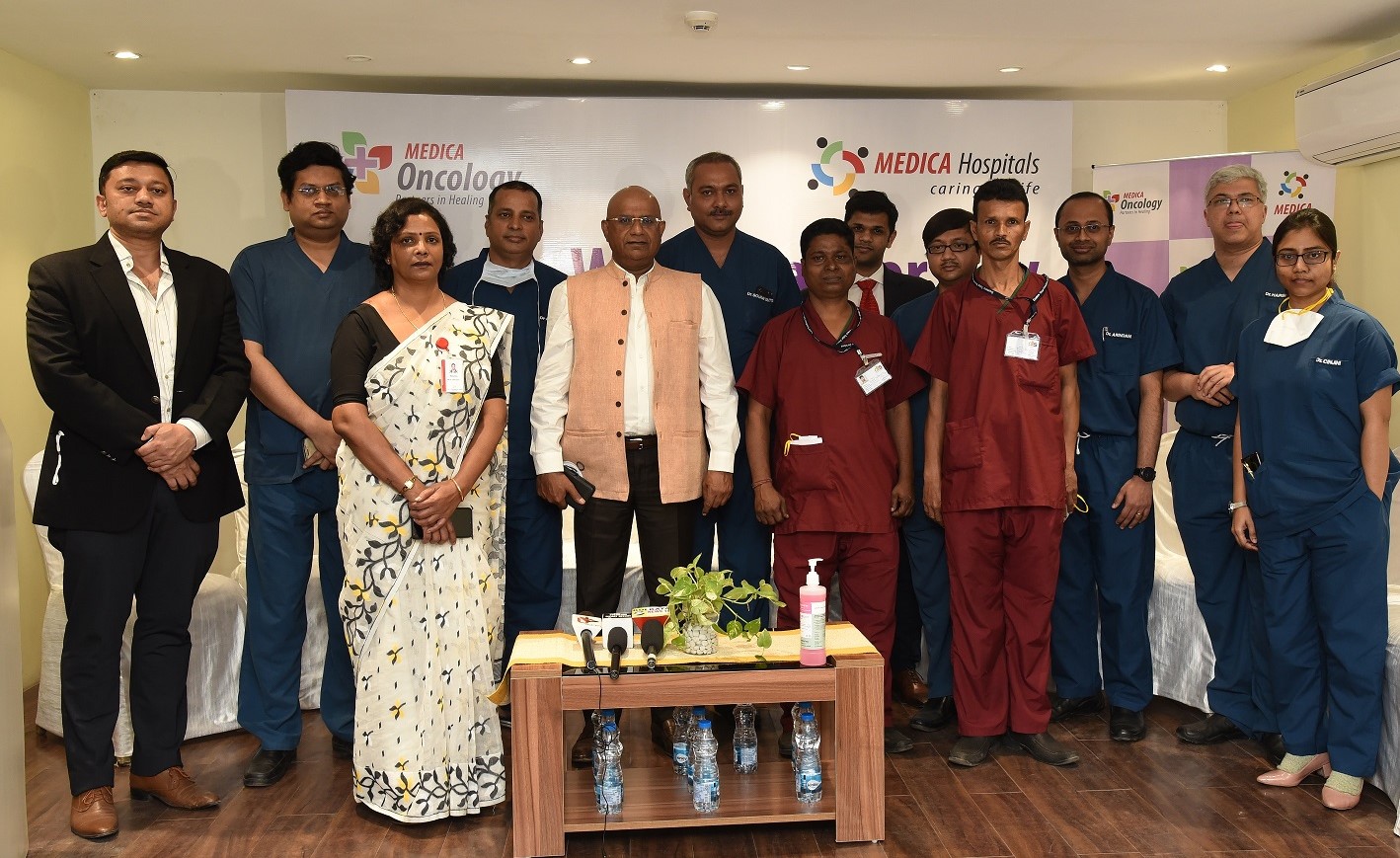 On World Cancer Day’s theme for 2022 “closing the care gap”, Medica is geared to set up a world class cancer treatment facility at Kolkata.

When it comes to cancer, many of us are denied basic care, even though we live in a time of awe-inspiring advancements in cancer prevention, diagnosis, and treatment. As caregivers, the endeavour is to strive constantly by making viable efforts to close this gap. People who seek cancer care hit barriers at every turn. Income, education, geographical location, discrimination based on age, disability and lifestyle are just a few of the factors that can negatively affect care.

On the eve of World Cancer Day, Medica Cancer Hospital proudly presented our first three ONCO survivors who are inducted as Medicans in our work force.

Rima Roy, 46 years, was detected with breast cancer in 2019. Lumps were seen at the arm pit region and the breast which she showed to a gynaecologist. He further referred her to an Oncologist as he suspected the lumps to be cancerous. Through a family friend, Rima got in touch with Dr. Sourav Dutta. She underwent biopsy and that confirmed her worst fears. In November 2019, Rima’s chemotherapy sessions started, and she had to go through 21 such sessions. Right now, she is free of cancer and needs to undergo six-monthly check-ups. Medica has recruited Rima in the operations department for the new Oncology Unit.

Surojit Mridha, 38 years, resident of Khudirabad, was first diagnosed with cancer of the penis at Medica Superspecialty hospital on 3.11.2018. He was facing some discomfort in that area from around August 2018 and had initially consulted a local doctor. He was advised oral medication which he took for almost three months, but there was no improvement. Then he consulted doctors at Medica Superspecialty Hospital and after the biopsy result it was confirmed that there was a cancerous growth. After being diagnosed with cancer in the first week of November 2018, he started his treatment and underwent surgery on 10.12.2018. He was released from the hospital after almost 15 days. Initially he was asked to visit the hospital after 15 days for the removal of the catheter and the tubes fitted for the drainage of the ascetic fluids. Presently he has been asked to go for an annual check-up. He was asked to do light work for at least one and a half years post the operation till the operated area completely healed up. Previously Surojit used to work under contractors on a daily wage basis in building constructions. Though he thinks he is fit to resume work, unfortunately he could not get any job anywhere. Surajit stays with his father, mother, wife and two sons aged 16 and 13 years. The amount spent for his treatment went up to almost INR 250,000/- which was arranged at that time via collections and donations from various sources. Medica has recruited Surojit as a Housekeeping operative for the new Oncology Unit.

Bimal Saha, 43 years, resident of Khudirabad, was suffering from constant fever for more than 8 months from the last week of December 2010. During this period, he visited many local doctors for a proper diagnosis. He was diagnosed with typhoid, jaundice, TB etc. in the meanwhile and was put under various treatments but there was no complete remission of the fever. During this period of consultation with local physicians, it was found that he had some swelling in the throat area which was diagnosed as Cervical Lymphadenopathy. Suspecting that the growth maybe cancerous and the fact that biopsy would be required the doctor suggested that he gets admitted in a hospital. Bimal visited a government run cancer hospital on 23.08.2011 for the first time and was subsequently advised for a surgery. He underwent the surgery to remove the lump and was hospitalised for almost two weeks. His biopsy report which was received post which it was then confirmed that the growth was cancerous, and he was asked to start Chemotherapy immediately. Bimal underwent 10 sessions of Chemotherapy, and this continued till almost the end of 2012. Initially he was asked to undergo monthly check-ups, then half yearly check-ups and then annual check-up currently. He had to spend almost INR 200,000/- on his total treatment which eroded his savings and he even had to borrow money from his friends and relatives. Bimal Saha stays with his wife and daughter. With no proper avenues for earning, Medica has recruited Bimal in the Housekeeping department for the new Oncology Unit.

These are some real-life Heroes who has fought cancer, braved all odds including societal pressures and economic adversities and still haven’t called it quits. We salute their indomitable spirits on such a momentous occasion.

Medica always believed to be using cutting edge technology with a heart. Technology that’s beneficial to patients in terms of reducing hospital stay thus reducing costs, better clinical outcomes, and faster recovery. With such aim Medica has now brought on board the Da Vinci Xi System that will now be able to provide the surgeons with multi-quadrant access, improved ease-of-use, an expanded instrument portfolio and an integrated table to enable a minimally invasive option for the breadth of surgical procedures. During the pandemic, there was an increase in the number of minimally invasive surgeries like Robotic-Assisted Surgery (RAS) across therapy areas – especially in cancer care, an indication that certain section of patients and surgeons are now choosing this procedure for the reason – it is more accurate and safer for the surgeon and patient with minimal post-operative care.

Speaking on the occasion, Dr. Sourav Dutta, Director Medica Cancer Hospital, said, “Cancer survivors are fit to work in most cases. It is just our mindset that we think they won’t be able to deliver, will take long leaves, might not sustain. To cure cancer, we must address the mental health issues of these patients and getting them engaged in work is one of the best options. At our Cancer Hospital, these survivors shall interact with other patients which will encourage these patients and their families. It will also give the survivors a sense of pride and realization that it is not a burden getting affected with cancer. Life must go on.”

Dr. Alok Roy, Member, FICCI Health Services Committee and Chairman, Medica Group of Hospitals, while echoing the thoughts of Dr. Sourav Dutta, averred, “Cancer treatment requires more of humane approach. Even if we use the best of technologies, it will go onto cure the physical aspect of the disease. The must be a holistic approach to address their mental concerns, empower them to return mainstream and help them rebuild their lives again. At Medica, our clinical team is very committed to bring this wholesome change of treating cancer patients and how we look at them in our day to day lives.”